Andrew Geller had a long career as a designer and architect for Raymond Loewy. He is also known for his simultaneously whimsical and ingenious beach homes built on the NY, NJ and Conn coastlines. (One of those homes, the Pearlroth House will be open to the public on October 17, 2015 at 10 AM and Cooper Alumni are invited to attend.)

Mary Lynch interviewed Jake Gorst on September 8, 2015. Jake is the Author of, Andrew Geller: Deconstructed: Artist and Architect which was published this year by Glitterati Incorporated.   Jake Gorst is the grandson of Andrew and Shirley Geller.

When did your grandfather first become interested in Art and in Architecture?

His father was an artist and Andrew grew up painting with him. He also had an interest in architecture at a young age. He told me that when he was around 7 years old, his family went to a camp with other families that they were friends with, and he would build little houses out of sticks and other small pieces of wood when he played outdoors there. Even then he was interested in spatial design.

Can you tell me how your grandparents met?

They met at the Cooper Union where they both studied Art. My grandmother was actually a year ahead of him at Cooper. She remembered meeting him for the first time at the beginning of his freshman year in the school cafeteria which was in the basement of the school. She claimed that he was the best looking fellow in the new bunch of students. Do you know any other details about their Cooper experiences?

They spent a lot of time together walking New York City sketching and gathering materials to paint on. Everyone was poor at that time so it was common to reuse items that others were throwing out. Grandma told me that she attended the camp that Cooper had for girls. The camp was new then, and she was there for the opening day. That was a favorite memory for her.

I believe your grandfather studied both Art and Architecture at Cooper Union. Is that right?

He entered Cooper Union as an Art Student, but he ended up studying with some very famous architects including Robert Gwathmey, Edmund Shaw, and Samuel Paul. Samuel Paul wrote a book about House Modernizing that was published in 1941. My grandfather did illustrations for that book while he was a student at The Cooper Union. He graduated from the architecture school. During his career, he worked in art, architecture and design. But he viewed himself as an artist. His study at Cooper was interrupted by the war?

Yes, my grandfather went into the army in 1943 and was injured during a training exercise involving mustard gas. While in the hospital, he saw an article about the design firm, Raymond Loewy and he claimed that is when he decided he would someday work for Raymond Lowey. While in the Army, he worked for the War Shipping Department. Because he had drafting experience, he was kept busy drawing and designing ship interiors. He figured out how to maximize the number of sailors that could fit into the limited space. He was stationed in New York City and my grandparents got married in 1944 while he was still in the army.
After the army, my grandfather worked a short while for a design firm in Pittsburg, and then moved back to New York City. He worked at several design jobs and also attended Cooper Union at night. He graduated from the Night Architecture School in 1947.

When did he begin at Raymond Lowey and what did he do there?

He worked for Raymond Lowey from 1947 until 1974. He designed several Lord & Taylor stores including the one located in Garden City, Long Island. He did many store interiors. And he designed several middle class homes.   One of his projects that is quite famous is the home that was put on display in the Soviet Union in 1959 as the “American House.” He designed the kitchen in that house and that is where The Kitchen Debate between Nixon and Khrushchev took place. (See article in the NY Times)

Tell me about beach houses.

The beach houses were done as free-lance work and they satisfied his artistic side. He would get up around 4 AM and work on the designs for one of his many beach houses. He then would typically go out to one of the building sites before going to his office job. He “un-squared” the cube. His designs stand in contrast to the rectangular housing design that was very popular in the 1950s and 1960’s. He was inspired by shapes such as the sails on boats and shapes found in Native American Designs. He used abstract and sculptural forms. He took pride in optimizing the space. He carried over some of the skills that he used when working for the army optimizing space in ships.

He was interested in “Green” architecture before that became a popular thing. He designed the homes to maximize natural light.

His work has inspired countless architects. You can see his influence in homes up and down the New York, New Jersey and Connecticut coastlines. 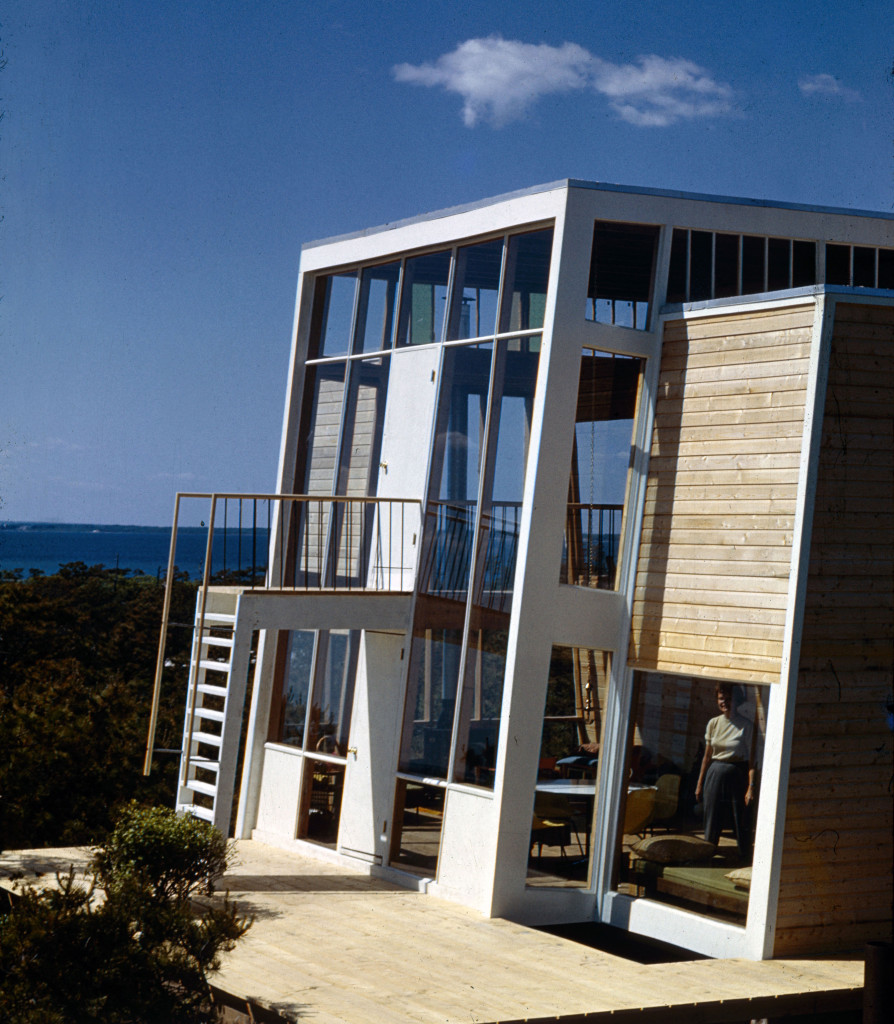 Did Shirley Geller Pursue an art career after she graduated from the Cooper Union?

While Andrew was in the army, she worked for a design company. She designed the packaging for Jujubes candy. Later, she had a fashion design business in Northport Long Island. She also did graphic design for businesses in Northport and Huntington. She also designed flower gardens. The Skidmore Garden in Northport is still maintained.
Andrew and Shirley painted together all the time. During the late 1980s and through the 90s, they would paint together every weekend. What would you like Cooper alumni to know about your grandfather?

You can see a video of Andrew Geller’s work here.