This post was originally published in the September 2011 CUAA Newsletter.

we pay special tribute to members of the Cooper community who contributed to relief efforts after September 11, 2001. The tribute highlights several projects, but is by no means an exhaustive list, of the many alumni, faculty, staff, and students involved in the recovery efforts during this trying time in New York City history.

Members of the Cooper community perished as part of the World Trade Center disaster. The Cooper Union Alumni Association had a plaque installed in the lobby of the Engineering School in their memory. A dedication ceremony took place on February 20, 2002 in the Wollman Lounge. CUAA President Jacob Alspector, AR ’72, Dean Eleanor Baum and Cooper Union President George Campbell all presented remarks. Images from that day can be seen in the article “We Will Remember…” from the Spring-Summer 2002 edition of Clockworks below. A new plaque was placed in the Dean of Engineering office at 41 Cooper Square, following the closing of the old Engineering Building (left).

Next we take a look back at The Cooper Union in 2001 through the Fall/Winter 2001 edition of atCooper. The next two articles highlight different ways in which the Cooper community contributed to recovery and relief efforts during this trying time in New York City history. 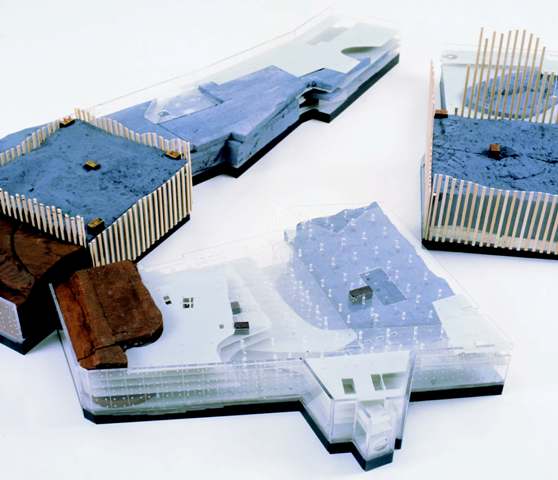 “And Students Shall Lead Them,” the headline reported in the Saturday November 3rd issue of New York Newsday. More than 40 students from the Irwin S. Chanin School of Architecture, built a plexiglass, wood and styrofoam model of the damaged “bathtub” substructure of the World Trade Center which will be used to assist those working in the recovery efforts.

Overseeing the project were Adjunct Professor Elizabeth O’Donnell, AR ’83 and alumnus Jiri Boudnik, AR ’96. Boudnik, a structural engineer, originally conceived the model when working at Ground Zero. He realized that a scale model of the ruined basement could be an invaluable aid to New York City’s engineers as they planned to excavate debris from the 7-story, 16-acre underground complex. Boudnik shared this idea with Cooper Union architecture staff and immediately O’Donnell and her students started working on the model. Using structural documents, drawings, reports and personal accounts from the engineers at Ground Zero, they completed the project in four weeks.

“It has been tremendously gratifying for me to work with students of such deep talent and tireless generosity: they drove the project forward through their midterm design reviews and exams. As one of the team said to me on the last night of the project, ‘Don’t worry about anything; this is what we do,'” O’Donnell commented during a press conference where the model was presented to city officials. The symbol and typography had become iconic, ubiquitous, over a quarter century. Now, Milton Glaser, A ’51 realized, something had forever changed the very core of our lives and our city. He knew he must update his most famous creation – the “I ♥ New York logo.”

The result – a new poster featuring a wounded heart and the added words, “More Than Ever” – gave New Yorkers an emotional uplift in the aftermath of Sept. 11, and was talked about widely. “Everyone realized the vulnerability of New York,” Glaser said. “Vulnerability intensifies our sense of affection; it makes us feel more deeply than ever before.”

Much public comment focused on the small scar placed on the heart. “The acknowledgement of injury is the beginning of healing,” Glaser told At Cooper Union. Less noticed in public discussion, though, was a subtle Glaser touch that further links the injured heart to the damaged city he loves: the scar sits on the heart’s lower left corner, roughly comparable to the spot on Manhattan maps that the twin towers once occupied.

Originally, Glaser hoped to license the new design as a vehicle to generate revenues for relief efforts. But he discovered that the complexities and legalities of enforcement were overwhelming. So Glaser cleared the way for others to achieve the same goal: “I decided the best thing to do is let it exist as an idea, rather than as a marketing instrument, and let people pick it up and use it as they will.” In September 2001, Julian LaVerdiere, A ’93 collaborated with several artists, architects and public art organizations on The Tribute in Light project — a New York City annual light memorial for the victims of the World Trade Center. It initially ran as a temporary installation from March 11 to April 14, 2002, but later became an annual project produced by the Municipal Art Society of New York.

Click here to learn more about The Tribute in Light Memorial. Daniel Libeskind, AR ’70 won the competition for the design of the Freedom Tower in February 2003. He gave a presentation about it to the Cooper community in a lecture presented in Wollman Hall that same year.  Although his initial design underwent many changes over the years, Libeskind remained developer of the master plan to rebuild the World Trade Center. Daniel Broyles, ME ’06/MME ’07 served as Project Manager in charge of the waterfalls and plaza lighting, as well as coordination of the mechanical, plumbing, and electrical systems in the visitor center and the museum. The World Trade Center Memorial opened to victims’ families on September 11, 2011.

Kevin Burke EE ’72 played a major role in the restoration of power following the attacks.  As President and Chief Operating Officer of Con Edison of New York, Kevin and his team were tasked with restoring electric, gas and steam service downtown to make up for the loss of two electric substations that resulted from the collapse of 7 WTC.  Thousands of our employees worked around the clock, laying 36 miles of temporary electric cable to rebuild the downtown grid.  As a result, the financial markets on Wall Street were able to reopen just six days after the attacks. Kevin Burke holds a spot in Cooper Union’s Alumni Hall of Fame

From  The Cooper Union  Albert Nerken School of Engineering Newsletter